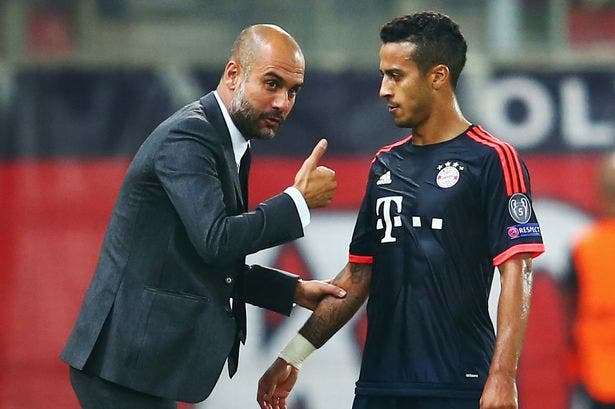 Manchester City boss Pep Guardiola thinks Bayern Munich midfielder Thiago Alcantara can adapt to the Premier League amid speculation that he will join Liverpool this summer.

On Friday, Bild insisted that Thiago ‘will leave’ Bayern Munich this summer and ‘his goal’ is to join Liverpool. Jurgen Klopp, in response, has ‘given the order’ for the Reds to sign him. The two clubs remain apart on their valuation of the Spain international with Liverpool refusing to pay more than £22.5m, while the Bundesliga giants are holding out for £36m.

Thiago was part of Guardiola’s Barcelona side in 2010/11 that won La Liga and the Champions League, while he was at Bayern for all three of Guardiola’s Bundesliga title triumphs. When asked about the speculation surrounding Thiago and whether he could play in the Premier League, Guardiola said: “No doubt about this. “A player who plays in Barcelona and Bayern Munich can play in the Premier League. Yeah, of course, he can play. He’s an exceptional player. But I don’t know what he’s going to do.”

Meanwhile, Liverpool icon Didi Hamann recently urged Klopp to sign Thiago to upgrade his “workhorse” midfield. “He doesn’t quite fit the profile of the Reds’ transfer policy at his age,” Hamann told Abendzeitung. “Regardless, a transfer would make sense in my eyes. “Jurgen Klopp has more workhorses in his midfield with Jordan Henderson, Fabinho and Naby Keita. He could use an intricate technical player like Thiago well. “On the other hand, he will surely have a new contract at Bayern waiting to be signed. I would be surprised if he was not offered a lot to stay.”