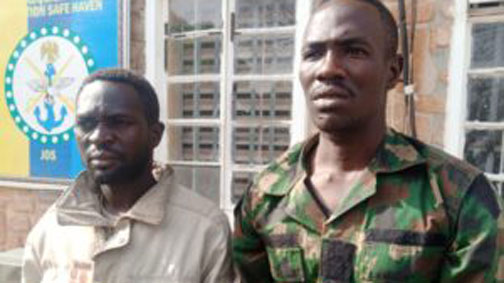 The Special Task Force, Operation Safe Haven (OPSH), has arrested Mahmud Mohmmed and Nuhu Ochofo, for impersonating as a soldier and personnel of the Nigeria Security and Civil Defense Corps (NSCDC), respectively in Jos.

Maj.-Gen. Chukwuemeka Okonkwo, the Commander of the task force, paraded the suspects on Friday in Jos.

According to him, the suspects, who use their fake identity to commit crimes in the state, were jointly arrested around Rayfield community of Jos South Local Government Area of Plateau.

Okonkwo said the fake soldier was arrested wearing full military uniform, while the other was caught with fake identity card of the NSCDC.

The Commander also paraded 18 other suspected criminals who were arrested for armed robbery, gun running and local militia group linked to recent attacks in some parts of the state.

He explained that the suspects were arrested at Bida-Bidi, Agwan Rimi, Zololo junction, Rayfield and Dung communities in Jos North and Jos South Local…