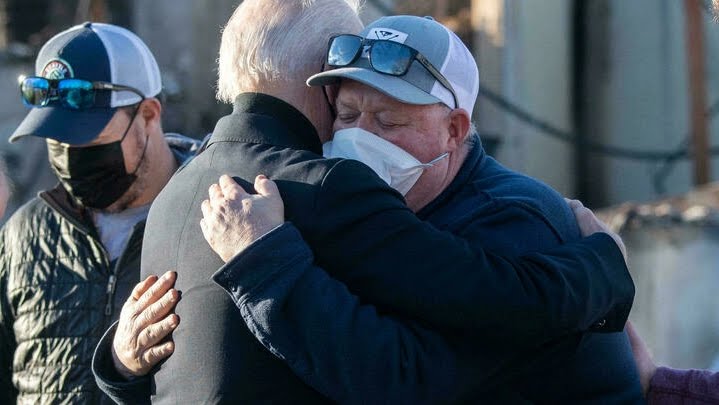 Some asked to hug, others got hugged without asking and one man, wearing the only clothes he had left, just clasped hands with Joe Biden as the US president made an emotional tour Friday of a devastating Colorado wildfire.

US President Joe Biden hugs a fire victim as he tours a neighborhood destroyed by the Marshall Fire in Louisville. SAUL LOEB/AFP

Surrounded by apocalyptic damage from the inferno, Biden sought to comfort locals.

The 79-year-old Democrat has long been famous for his ability to show empathy with the suffering and his powers were on full display as he moved along a line of families and firefighters in Louisville, which burned to cinders in the December 30 Marshall Fire.

“We lost everything,” a man told Biden and his wife, First Lady Jill Biden.

“I’m not even properly dressed because this is all I have,” the man said to Biden, gesturing at his long shorts.

“We definitely need help,” said the man’s son, who was also dressed in shorts, despite the snow…