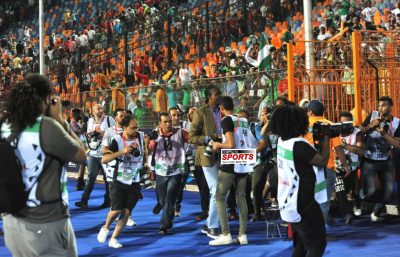 Former Nigeria captain Nwankwo Kanu was mobbed by an excited Egyptian fans following the Super Eagles 2-1 win against the Bafana Bafana of South Africa in their quarterfinal clash at the Cairo International Stadium on Wednesday, Completesports.com reports.

Kanu, who is one of the Confederation of African Football (CAF) ambassador for the 2019 Africa Cup of Nations in Egypt was in joyous mood after the Super Eagles secured their passage into the semifinal of the competition.

The former African Footballer of the Year left his sit in the VIP stand to celebrate with the Super Eagles on the pitch after Moroccan referee, Redouane Jiyed blew the final whistle, he was massively hugged by the Egyptian fans majority of whom supported the Super Eagles in the game.

Oparanozie Has Bus Stop In France Named After Her

Osimhen: Drogba Would Forever Be My Idol

Aguero To Be Sidelined For Two Months With Injury