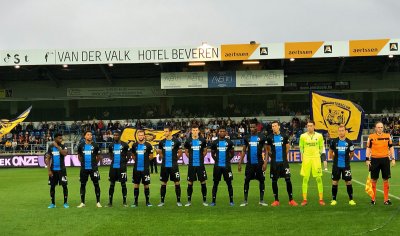 U-23 Eagles forward David Okereke scored on his competitive debut for Club Brugge who defeated their hosts Waasland-Beveren 3-1 in their Belgian league clash at the Freethielstadion, Beveren on Saturday, reports Completesports.com.

Francesco Forte opened scoring for Waasland-Beveren in the 32nd minute, but Club Brugge rallied back with three goals to silence the home fans.

Hans Vanakan equalised for the visitors from the spot in first half stoppage time, while Okereke gave them the lead for the first time in the game three minutes after the break.

Vanakan made the three points safe when he grabbed his second of the game in the 71st minute.

Okereke in action for Club Brugge against Waasland-Beveren

Okereke’s international teammate, Emmanuel Dennis Blessed also started the game and was replaced by Thibault Vlietinck in the 64th minute.

He recently linked up with…