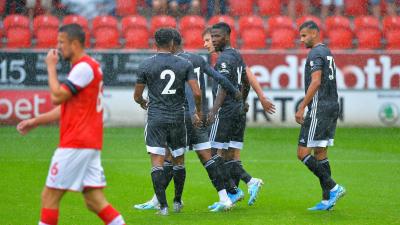 Kelechi Iheanacho believes he is regaining his confidence with his resurgent scoring form for Leicester City following a difficult spell at the club last season, reports Completesports.com.

Iheanacho endured a tough campaign with the Foxes struggling to make an impression first under Claude Puel and later under Brendan Rodgers.

The 22-year-old was also dropped from Nigeria’s squad to the 2019 Africa Cup of Nations in Egypt due to his poor club form.

He scored his first Leicester City goal since September in last Tuesday’s 3-0 friendly win against Scunthorpe and followed that with a sublime brace in the 2-2 draw against Rotherham United on Saturday.

“I am delighted, I am happy getting two goals today,” Iheanacho said after the game against Rotherham United.

Simon, Neymar, Depay Named In Ligue 1 Team Of The Week –