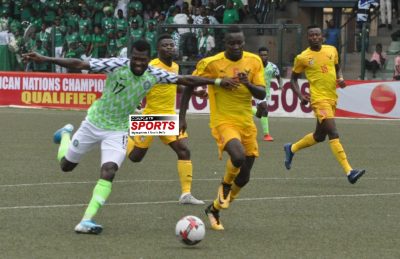 LLobi stars and Super Eagles B Striker Sikiru Alimi who netted a brace in the 2-0 win against the Hawks of Togo at the Agege Stadium Lagos on Saturday, has attributed the team’s failure to score more goals in that CHAN 2020 qualifying second leg match to ill-luck, Completesports.com reports.

The Eagles lost the first leg in Lome 4-1 and needed to win the reverse fixture with at least three goals without conceding, but they could only win 2-0 courtesy of a brace from Alimi.

The 2-0 win in Lagos saw the Imama Amapakabo’s team lose 4-3 on aggregate, thus failes to book a spot at CHAN 2020 finals.

“It’s quite unfortunate thar we couldn’t make it to CHAN 2020, though we gave our all in both games. I think we got our tactics right, but we were just unlucky,” Alimi told Completesports.com.

The striker scored four goals for the Super …

I Have Mental Strength Going For Me Lately Representing Africa

Super Eagles Can Win 2021 AFCON, But..; Football Will Change