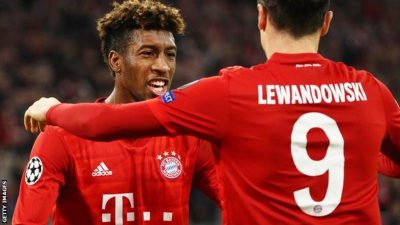 Arjen Robben and Franck Ribery both left FC Bayern Munich last summer after their ‘Robbery’ partnership had become the cornerstone of nearly a decade of unrivalled success for the record Bundesliga champions, leaving 23-year-old Kingsley Coman as their natural successor.

Remarkably, Kingsley Coman set a new Bundesliga record against SC Paderborn 07 on Matchday 6 by clocking a top speed of 22.2 miles per hour (35.7 km/h), officially making him the fastest-ever player in the league.

In this week’s interview, the France international talks about Bayern – Dortmund ‘Der Klassiker’ at the Allianz Arena, his idol Ronaldinho and fitness keeping for the tough Bundesliga.

How important is the match against Borussia Dortmund
on Saturday?

I Run For All Of Africa And Future Generations

It’s An Honour To Represent AfricaAfrica In The Diamond