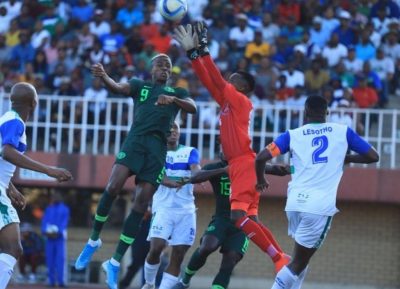 Super Eagles head coach Gernot Rohr says he is impressed with his players’ brave efforts in Sunday’s 4-2 away win against Lesotho in an AFCON 2021 qualifying match, insisting that the opponents scoring first didn’t count in the end, reports Completesports.com.

Rohr’s charges conceded early in the game but fought back to win the game 4-2 with Victor Osimhen netting a brace and Alex Iwobi and Samuel Chukuweze scoring the other goals.

“Some matches, you score the first goal and in some matches you concede first,” Rohr told reporters after the game.

“We scored first against Brazil and Ukraine but we didn’t win, so I prefer to concede first and win the match.

“This has proven that my players have a good spirit because they never give up.

“They continue to play well and do not panic. We have a very young team and what I like is the enthusiasm to play football.”

The German tactician was full of…

Middlesbrough Boss: Akpom Will Score More Goals For Us