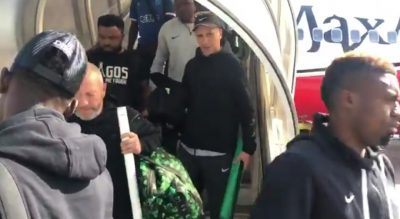 The Super Eagles are back in the country following Sunday’s 4-2 away win against the Crocodiles of Lesotho, reports Completesports.com.

The players and their officials arrived Abuja on Monday morning abroad their chartered Maxi Air plane.

“The Eagles have landed in Abuja. Thank you all for the support. #SoarSuperEagles. #Team9jaStrong,” reads a Tweet on the Super Eagles’ Twitter handle.

Gernot Rohr’s team is currently top of Group L on six points from two games. Benin are second on three points, while Sierra Leone and Lesotho occupy third and fourth positions respectively with one point apiece.

The three-time African champions will host Sierra Leone at home in their next 2021 Africa Cup of Nations qualifier on August 31, 2020.

The reverse fixture will take place on September 8 in Freetown.