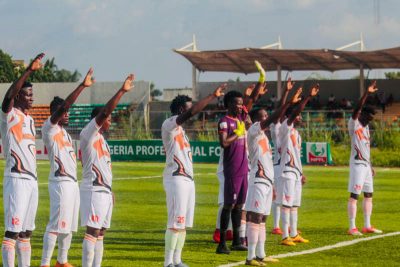 Heartland will overcome their early season poor run to eventually fight and claim one of the top three positions at the end of the season, club chairman, Barrister Charles Ezekwem told Completesports.com in an exclusive interview.

The Naze Millionaires got off to a poor start in 2019/2020 NPFL season with a 1-0 home defeat to MFM FC, and the result adding up to the leadership crisis rocking the very foundation of the five-time league winners.

After a 1-1 draw at Rivers United on matchday-two, there were hopes that Heartland’s early season setback was gone, but Akwa Starlets stormed Okigwe and snatched a slice of the spoils in a 1-1 draw.

Heartland players acknowledge cheers from fans before a match

Ezekwem told Completesports.com that Heartland’s present predicament is due to problem of blending . He also believes the team will come good as soon as they jell and that they will eventually be among the top…

Troost-Ekong: I Want To Play In The Premier League With Watford