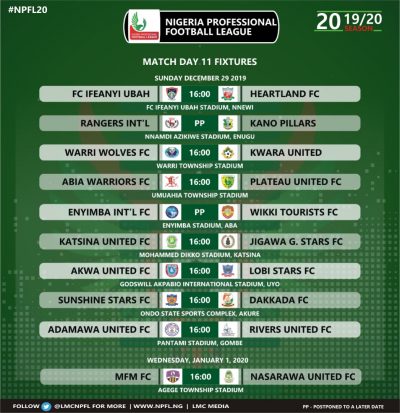 Abia Warriors have beaten the war gong, boasting they will have no reason to fret over the NPFL matchday 11 break or bend clash versus leaders, Plateau United today (Sunday) at Umuahia Township Stadium, Completesports.com reports.

Plateau go into Sunday’s battle standing firmly on top of the NPFL table on 21 points as against the Warriors’ 9th spot on 14 points, with a huge seven points separating both sides on the log.

However, Abia Warriors Sporting Director, Patrick Ngwaogu, , says they have nothing to fear about the Tin City side’s profile.

Ngwaogu say though Abia Warriors have respect for every opponent, they have no reason to be wary of Abdul Maikaba and his men.

“No cause for alarm. We are poised to gv Plateau a run for their money,” the Warriors Sporting Director assured.

“We are not and cannot be intimated by their (Plateau United) position in the table, no, never.

“Just as we always say, the league is like a marathon…

Junior Ajayi Back In Training With Al Ahly