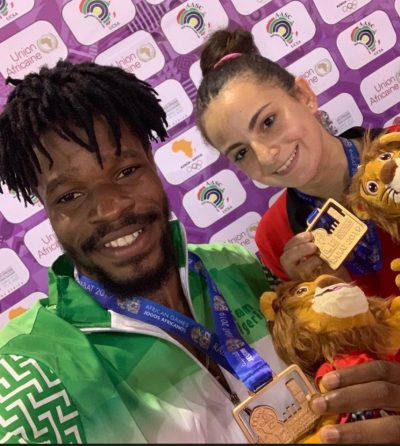 This was revealed by the ITTF-Africa, in a statement released on Monday.

The tournament will hold at GETEC Arena in Magdeburg from Tuesday January 28 to February 2, 2020.

Omotayo had earlier said he would compete in some of the elite tournaments this year as part of his buildup to Tokyo 2020 Olympic Games.

Nigeria’s Olajide Omotayo and Dina Meshref of Egypt after winning the men’s and women’s table tennis singles titles respectively at the 2019 All African Games in Rabat, Morocco

“I hope and believe I can make it to Tokyo 2020 because I know that my winning the African Games means more hard work and that is why I am going to compete in some of the elite tournament this year. I am starting with the German Open with the hope that playing against the best in the…