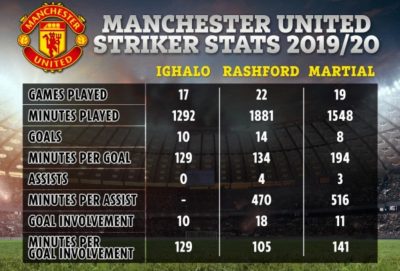 Odion Ighalo is set to be thrust in at the deep end at Manchester United. The Nigerian has been brought in to replace the crocked Marcus Rashford, as Solskjaer desperately tries to add goals to his side’s dwindling top four push.

And the numbers, according to a The Sun report, show that, albeit in the oft-maligned Chinese Super League [CSL] – Ighalo certainly knows where the goal is.

The former Watford man himself suffered an injury hit 2019 CSL campaign, missing 12 games in all competitions with a hamstring injury – as well as another five while at the Africa Cup of Nations.

When he could take to the field though, Ighalo was lethal, netting ten goals in 17 CSL appearances, including seven in his first eight prior to his injury.

While he’s certainly not as creative as Rashford, with zero assists attesting to that, he certainly has the single-minded instinct of many top strikers – with the finishing…

How Rohr is Getting Goalkeeping Worries

Cavaliers Come To Town To Meet Zion Williamson And Pels, At Smoothie