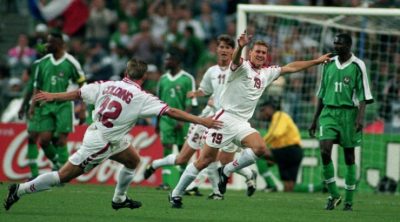 Former Nigeria international Daniel Amokachi has labelled the Super Eagles squad to the France 1998 World Cup as the worst he has ever played in, Completesports.com reports.

Amokachi said this during his radio programme ‘Bull’s Pit’ on Brila FM.

The Eagles headed to the 1998 World Cup in a very bad shape.

They lost 1-0 to Germany, were beaten 3-0 by the former Yugoslavia and got bashed 5-1 by Holland in their friendly games leading to the tournament.

However, in their opening group game the Eagles shocked favourites Spain 3-2, beat Bulgaria 1-0 before losing 3-1 to Paraguay in an inconsequential game.

Unfortunately they got eliminated in the round of 16 following a 4-1 defeat to Denmark.

Aside from on the pitch issues, there were talks of unrest in the team’s camp which has been attributed to their poor outing.

Only recently a member of the side Taribo…