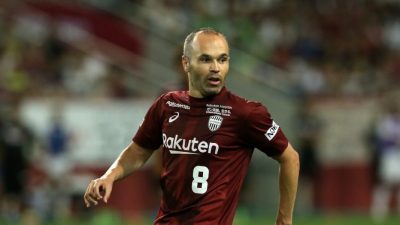 FC Barcelona and Spain legend, Andres Iniesta says that the Blaugrana golden generation that won four Champions League titles in nine years and had huge dominance of Spanish football will never be recreated.

Iniesta himself is part and parcel of the Barcelona golden generation which bulk of superstars graduated from La Masia Academy. Others are Carles Puyol, talismanic forward Lionel Messi, Xavi Hernnndez Creus, Sergio Busquets and Gerard Pique.

While totally ruling out any chances of similar assemblage of superstars at Barcelona in future, Iniesta however, believes the club will continue to be great and be winning titles.

“That generation will never be repeated but what follows does not have to necessarily be worse in terms of how the club fares,” 35 year old Iniesta who currently plays for J-League side Vissel Kobe told UK newspaper The Guardian.

Iniesta in action for Vissel Kobe

“I had seen Puyol…