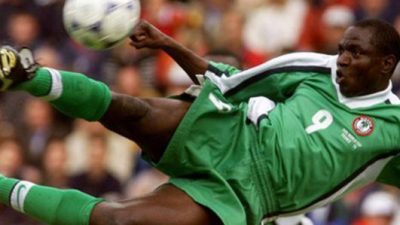 Remembering the late Yekini, FIFA published a video of the former Shooting Stars striker’s goal against Bulgaria at the 1994 World Cup in the United States.

It was Nigeria’s first ever World Cup goal with the Eagles going on to win 3-0.

“Rasheed Yekini produced one of the most iconic celebrations in #WorldCup history after scoring the @NGSuperEagles’ first-ever goal in the competition.

“Africa sadly lost of its greatest-ever players #OnThisDay in 2012, but his legend will live on eternally,” FIFA wrote on their verified Twitter handle.

The NFF wrote:  “Today we remember one of the World’s…

UCL: Chelsea Ready For The Big Fight Against Real Madrid

Varane Out Of Chelsea Vs Real Madrid Tie With Injury