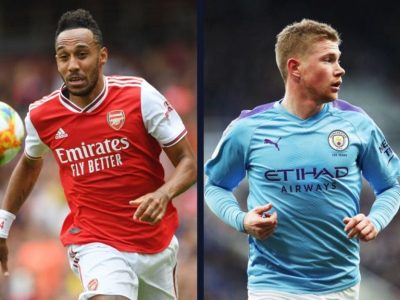 Manchester City will go into Saturday’s Emirates FA Cup semi-final against Arsenal inside Wembley stadium with the hope of making it back-to-back finals.

The last team to qualify for consecutive finals was Chelsea in 2017 and 2018.

In last season’s final City made light work of Watford as they outclassed the Hornets 6-0 to land their first FA Cup title since 2011.

City go into today’s tie on the back of seven straight victories against Arsenal, scoring 20 goals and conceding just two goals.

The last time City lost to Arsenal was in the semi-final of the 2017 FA Cup after goals from Nacho Monreal and Alexis Sanchez cancelled out Sergio Aguero’s opener.

Arsenal went on to beat Chelsea 2-1 in the final to claim a record 13th FA Cup title.

City go into Saturday’s clash against the Gunners in the best of forms as they have secured wins in their last three games.