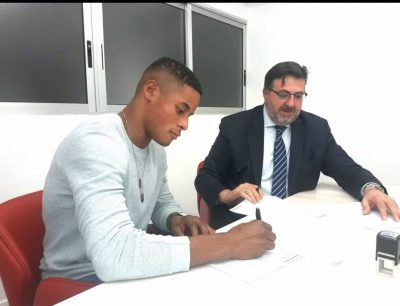 Omoruyi joined Huesca as a 18 year old in July 2019 from Tercera Division [4th Division] side AD Almudevar and have had.been the club’s youth team.

The lad who is of Nigerian mother and Spanish mother, will be looking to to impress Huesca coach Michel Sanchez soon and join his compatriot Kelechi Nwakali in the first team.

Omoruyi got his upgrade at SD alongside right-winger Manu Molina, and the new development was announced on Huesca official website on Thursday.

“The footballers Kevin Carlos [Omoruyi] and Manu Molina, youth players from the Sociedad Deportiva Huesca, renewed their relationship with the Catalan club until 2023 and 2021 respectively,” Huesca stated.

Arsenal Line Up Move For Jorginho