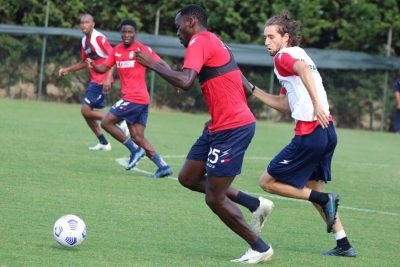 Simy Nwankwo scored twice to help Crotone destroy Vibonese 6-1 in a pre-season friendly as the Nigerian striker expressed his readiness for the 2020/21 Serie A season, Completesports.com reports.

Ahead of Crotone’s opening Serie A tie against Genoa on Sunday, coach Giovanni Stroppa tested his players in a friendly at the Vibonese Stadium and they passed in flying colours.

Simy and Kargbo impressed with a brace each, while the other goals came from the duo of Messias and Riviere as the newly-promoted Sharks prepare for their first game at Marassi.

Simy emerged top-scorer in the Serie B for the 2019/20 season with 20 goals, one ahead of Perugia’s Pietro Lemmello who netted 19 times during the campaign which ended in July.

Simy in action for Crotone against Vibonese

That was also his most prolific season ever, netting 21 times in 38 games in all competitions for Crotone and logging a total of 3,115 minutes with a…