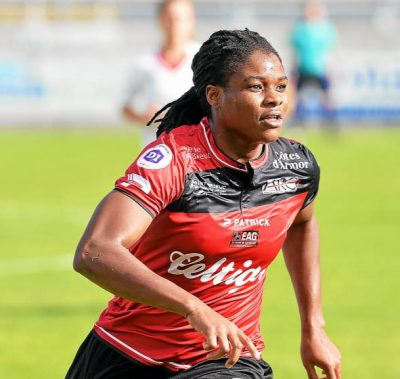 Super Falcons striker Desire Oparanozie has a bus-stop in Guingamp, France, named after her, Completesports.com reports.

This was confirmed in a photo published on Twitter.

Oparanozie joined Guingamp in 2014 from Turkish club Ataşehir Belediyespor and had a memorable time there.

Ahead of the 2019–20 season, Oparanozie was named club captain and began her reign with a win over Metz on the opening day of the season.

And after six years at Guingamp Oparanozie signed a two-year contract with Dijon FCO on 30 June.

Also Read: Osimhen: Drogba Would Forever Be My Idol

Oparanozie started her career at Bayelsa Queens in the Nigerian Women’s league and moved to Delta Queens in 2010.

She then spent two months on loan at
Düvenciler Lisesispor in the Turkish Women’s First Football League in 2011, before returning to Delta Queens.

In 2012, she joined Rossiyanka from the
Russian Women’s Football…