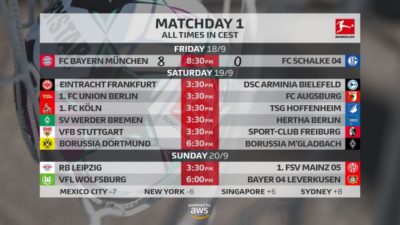 The Bundesliga is back for its 58th season in 2020/21 and it kicked off with a bang. The traditional curtain raiser didn’t just see the title-holders open the action, but the reigning European champions – treble-winners, FC Bayern Munich, set the tone for a thrilling season with 8-0 mauling of Schalke 04 at the Allianz Arena on Friday, the Hansi Flick’s men extended their unbeaten run to 31 competitive matches.

The big-name action continues today (Saturday) with the Battle of the Borussias. With captain Marco Reus fit again, Borussia Dortmund’s attacking prospects are frightening – and young – in Jadon Sancho, Erling Haaland and Gio Reyna, while Jude Bellingham also scored on his debut in the DFB Cup. They face a Borussia Monchengladbach team a year…

The App That Connects Talent To Scouts, Clubs And Fans –