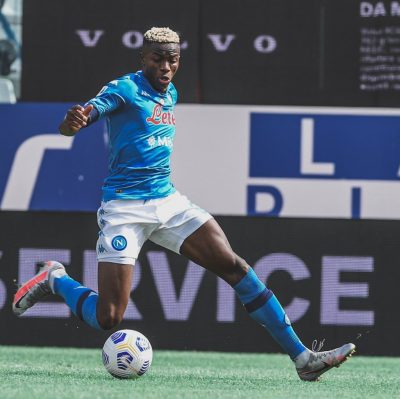 Victor Osimhen has been included in Italian Football TV (IFTV) Serie A Team of The Week following his inspiring performance which helped SSC Napoli to secure victory on his top-flight debut for the club, Completesports.com reports.

Osimhen was only on for 30 minutes in his debut game for the Partenopei on Sunday when they defeated Parma by two goals to nil in their opening Serie A game of the 2020/21 season.

The Nigerian international came on
to completely change the game for the Partenopei who had struggled to break through the Parma defence in the first 60 minutes of the match.

Lorenzo Insigne and Dries Mertens grabbed one goal each as Napoli were inspired by new signing,
Osimhen’s entrace in the second hali, precisely în the 60th minute against Parma.

Osimhen in action for Napoli against Parma

The IFTV’s first Serie A Team…