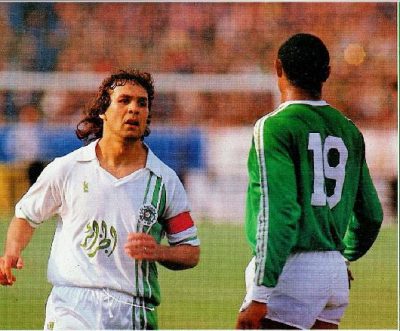 Former Nigeria international Moses Kpakor has revealed why the Super Eagles suffered a heavy defeat against hostsAlgeria, in the opening game of the 1990 Africa Cup of Nations.

The Eagles, parading mostly home-based players, were hammered 5-1 by Algeria in their group opener.

Other players in the starting eleven were Ayo Ogunlana, Tajudeen Oyekanmi, the late Thompson Oliha and Aminu Abdul. Coming on as substitutes were Emmanuel Okocha  (elder brother to Jay Jay Okocha) and Baldwin Bazuaye.

Algeria opened scoring in the 36th minute through Rabah Madjer who also made it 2-0 on 58 minutes.

Djamel Menad got the third and fourth goals in the 69th and 72nd minutes.

Okocha scored in the 82nd minute before Djamel Amani added the fifth with two minutes left in the game.