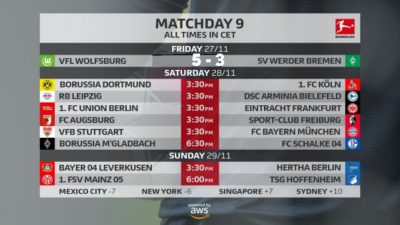 There are just two points separating the top four sides in the Bundesliga as we head into Matchday 9.

FC Bayern Munich are top of the pile as they travel to VfB Stuttgart, and head coach Hansi Flick will be taking nothing for granted after his reigning champions were held to a draw at home to SV Werder Bremen last time out. Robert Lewandowski, who is gunning for his sixth Torjägerkanone, will be out to add to his 11 goals in just seven league appearances so far.

Lewandowski has Erling Haaland hot on his heels though, on 10 goals, after the Borussia Dortmund wunderkind hit a four-goal salvo in last week’s 5-2 win at Hertha Berlin.

The 20-year-old Norwegian will be intent on terrorising 1. FC Cologne in similar fashion this weekend, while the Bundesliga’s youngest ever player, Youssoufa Moukoko, may have another opportunity to become its youngest ever goal scorer.

Also Read – Odegbami: Maradona – The Gift Of The gods!

Bayer 04 Leverkusen are currently the best of…