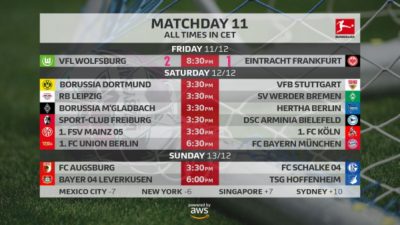 Matchday-11 started on Friday with and Wolfsburg extended their undefeated streak to 11 games following a 2-1 home win against Eintracht Frankfurt at the Volkswagen Arena. And there are great fixtures today will the Champions League teams raring to go.

UEFA Champions League defending champions FC Bayern ploughed through Group A, advancing to the knockout stage as unbeaten winners. Hansi Flick’s side also lead the way in pursuit of a ninth successive Bundesliga title, after battling back to draw 3-3 with RB Leipzig in a top-of-the-table tussle for the ages last time out.

The record champions face Union Berlin in Saturday’s late game, with Robert Lewandowski set to make his 200th Bundesliga appearance for the club and needing to score just…

Sadiq Scores Again As Almeria Secure Away Win At Girona

Osimhen Scores On Napoli Return In Home Win vs Bologna