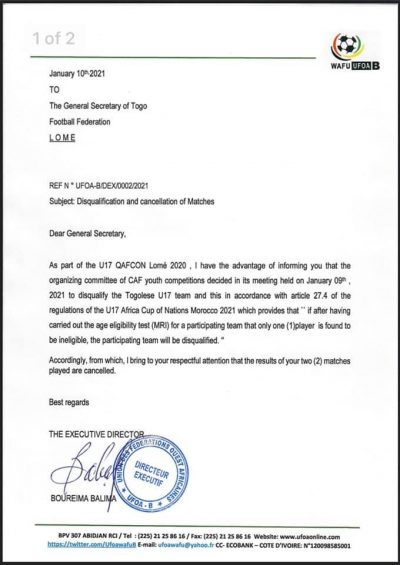 Host of the WAFU Zone B U-17 qualifiers, Togo, has been disqualified from the tournament after two of their players failed the MRI test.

Togo’s disqualification from the tournament was made known officially to the General Secretary of the Togo Football Federation in a letter signed by Boureima Balima the Executive Director of WAFU.

The letter states that the two games already played by Togo against Benin and Niger Republic in Group A will be cancelled.

Prior to the disqualification, Togo were top of the group after victories against Benin and Niger and were billed to take on Burkina Faso in their last group fixture today (Monday).

The WAFU Zone B tournament in Togo will decide the participating teams for the 2021 Africa U-17 Cup of Nations to be hosted in Morocco in July.

What To know Before The 2021 All-Star Game