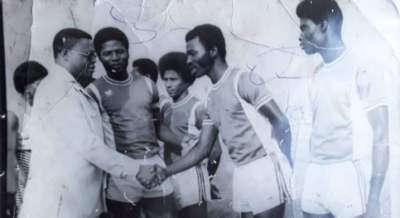 Although not as popular as his namesake, Segun Odegbami, Adeleke was for a brief period Odegbami’s contemporary in the Green Eagles of the mid-70s. While Odegbami came from Shooting Stars Football Club of Ibadan, Adeleke is touted to have featured for their city rivals, Water Corporation Football Club, before heading to the United States in the early ‘80s for academic studies. Thereafter, he settled down to live in that country.

One of his closest friends in the Green Eagles was Godwin Iwelumo with whom he attended the famous Gaskiya College in Lagos.

In a tribute that he wrote in his popular sports column, “The Mathematical,” Odegbami described Adeleke as “a folk hero in the Lagos and Western Nigerian football axis” during the late ‘70s.

Segun Adeleke in handshake with Governor of then Western State, David Medayese…

Ronaldo Overtakes Messi As Highest Paid Footballer In The World

Super Eagles Attack Will Be Key For 2022 AFCON Success -Dosu