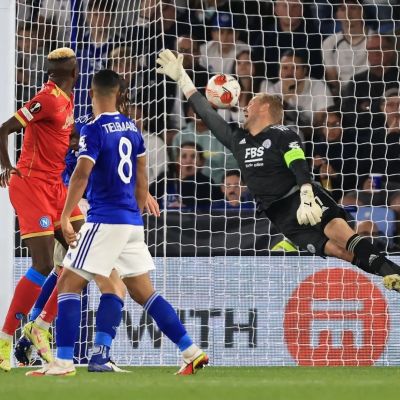 Victor Osimhen emerged the hero as his brace saw Napoli come from 2-0 down to hold Leicester City to a 2-2 draw, at the King Power stadium in Thursday’s Europa League Group C clash, Completesports.com reports.

While Iheanacho set up Leicester’s second goal, Ndidi was sent off in added time.

The Foxes took the lead in the 9th minute through Ayoze Perez.

In the 64th minute Leicester doubled their lead thanks to Harvey Barnes off Iheanacho’s assist.

Osimhen then began the fightback for Napoli as he pulled a goal back in the 69th minute.

And with three minutes left Osimhen completed the fightback as he struck to make it 2-2.

And in the 93rd minute Ndidi was sent off after receiving his second yellow card.