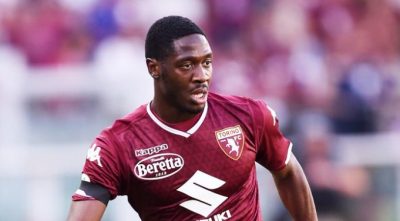 Aina’s contract with Torino expires in 2023, although there have been reports of a possible extension.

And According to Kiss Kiss Napoli via Tutto Napoli, Napoli are looking to strengthen their left side of the defence and have included Aina in a list of their targets.

Mario Rui is Napoli’s current left-back, but Luciano Spalletti’s side are looking for a younger player as the Portuguese star turns 31 next May.

And it is believed Aina fits the role perfectly as he is just 25 and can play as a left-back and a right-back.

If the move materialize, Aina would become teammate with Victor Osimhen at the club.

Both players are currently on international assignment as the Eagles prepare to face Liberia and Cape Verde, in the 2022 World Cup qualifiers.