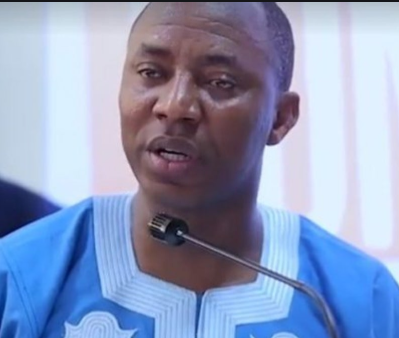 The convener of the RevolutionNow movement, Omoyele Sowore, has denied involvement in a WhatsApp voice note in circulation linking him to a call for the mass murder of political figures, particularly in Lagos. In a Facebook post to his supporters, Sowore said;

“It has come to my attention that a WhatsApp voice note is in circulation urging people to engage in mass murder of political figures particularly in Lagos, this voicenote purportedly made by a soldier in Yoruba language made mention of my name several times during a rant calling on young people to engage in violence.”

“I am using this opportunity to repudiate the attempt to remotely or directly link me with violence or any plan to carry out mass murder(s) as explained in the said voicenote. I suspect that this voicenote might in fact have emanated from elements within the Buhari regime in a desperate attempt to rope me into another byzantine plot with the aim of rearresting me under the guise of investigating this latest bogey. I urge all our supporters to ignore the said voicenote and continue to focus on the task of working assiduously to rescue our nation as we’ve consistently publicly defined through #RevolutionNow“

The publisher of Sahara reporters, who is under trial for treason was granted bail that restrict him to the Federal Capital Territory.

Akpabio warns: Those who swallowed NDDC funds must cough it out