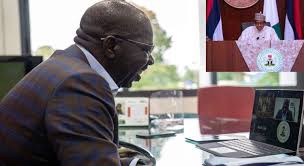 Edo State Governor, Godwin Obaseki, who had in June defected to the Peoples Democratic Party (PDP) from the ruling party, All Progressive Congress (APC), has on Monday said in spite of the development, his relationship with President Buhari “is that of a father and son”.

Obaseki stated this via his official twitter handle while also revealing he “was on a zoom meeting” with the Nigerian President, Muhammadu Buhari. According to Obaseki’s tweet; “My relationship with President Buhari is that of a father and son. I was on a zoom meeting with the President, during which we engaged on development issues affecting Edo people and Nigerians. “We also discussed measures to manage the spread of COVID-19.”

The Edo incumbent governor was disqualified by the APC screening committee over discrepancies in his academic credentials.

Following his defection to the opposition party (PDP), Obaseki and his deputy, Philip Shaibu were given a waiver and allowed to participate in the party’s governorship primary election. The governor emerged as the flagbearer with a total vote of 1,952. During the presentation of his certificate of return and flag at the Wadata Plaza, headquarters of the Peoples Democratic Party, PDP, in  Abuja, Obaseki was accompanied by two aspirants who stepped down for him ― Engineer Gideon Ikhine and Mr Kenneth Imasuangbon.