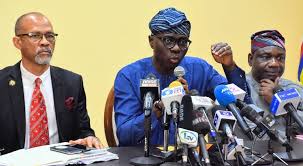 The Lagos State Government has urged striking doctors under its employment to suspend their three days warning strike and return to work.

The State Commissioner for Information and Strategy, Mr. Gbenga Omotoso, made the plea in a statement in Lagos released on Monday night.

Omotoso said that the call became necessary after a joint meeting between the State Commissioners for Health; Establishments, Training and Pensions, and Head of Service with the Medical Guild, Association of Resident Doctors, and relevant stakeholders on the warning strike. He noted that the state government was disappointed at the warning strike embarked upon by the Guild.

The commissioner said that most issues raised by the Guild had been resolved, while unresolved issues were still being deliberated upon. On some issues raised by the Guild, Omotoso said that the state was currently rotating health workers engaged in providing care at its isolation facilities. He said that health workers were not being unceremoniously dismissed from the isolation centres, but returned to their primary posting to reduce fatigue and burn out among them. According to him, the healthcare workers were being rotated to build capacity for the treatment of COVID-19 across the health workforce and to ensure that many health workers benefit from the additional allowances. “Mr. Governor has been extremely supportive of health workers being mindful of the extreme sacrifices that healthcare professionals are demonstrating in the COVID-19 response,” he said. On the non-payment of COVID-19 allowances for May and June, Omotoso said that the state government started paying extra special COVID-19 allowances for frontline workers who were involved directly with the state COVID-19 response. “This was put in place before any other state in the country, with payments as high as N672,000 per month, in addition to their normal remuneration packages for each cadre. “This represents financial incentives over and above that paid by their federal counterparts,” he said. On the Skipping Policy that places federal healthcare workers a Grade Level above their state counterparts, Omotoso said the policy was responsible for the disparity in the salary of state and federal doctors. “It is important to note that this is not in conformity with the Scheme of Service agreed by the National Council of Establishment and is a subject of litigation in the Federal Court of Appeal. “Therefore, the State Government cannot implement such a policy until the judgment is delivered,” he said. Omotoso maintained that a meeting had been scheduled with officials of the Lagos Internal Revenue Service (LIRS) to explore ways of reducing the tax burden on healthcare workers. He noted that the state government would fast track the testing of health workers on a weekly basis, adding that emergency testing of health workers would also be arranged when necessary. “The Lagos State government recognising that the state is the epicentre of the COVID-19 pandemic in the nation has gone over and beyond its duty of care to ensure that welfare of the medical workers in the state is placed as a top priority,” he said. The commissioner said that the governor had given approval to the Health Service Commission to employ over 760 health workers of which at least 400 were doctors. Omotoso, however, said the pandemic had made the government to adjust the recruitment procedure, adding that it would conclude the first batch of recruitment within a month. He noted that all frontline health workers in isolation centres had been insured by a consortium of insurance companies, adding all civil servants in the state, including all health workers, had also been insured by LASACO.

Omotoso stated that the state government was committed to ensuring it won the COVID-19 battle. He advised the Guild to continue to explore dispute resolution processes provided by the state government to resolve all issues. The commissioner urged the Guild to bear in mind that this was an unusual time for the nation and the world. Omotoso assured citizens that services at all state-owned health facilities could still be accessed while the negotiation was ongoing with the Guild. The Medical Guild had on July 13 commenced three days warning strike over issues that affects their safety and welfare.