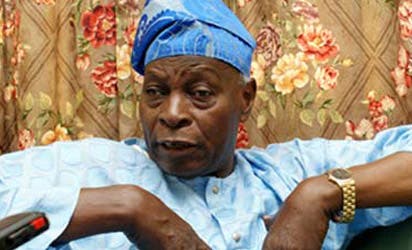 Elder statesman, Chief Olu Falae, has said Yorubaland is the glue holding Nigeria together, invested a lot to maintain peace in the country and, therefore, cannot be talking of secession. Falae, a former Secretary to the Government of the Federation, Minister of Finance, Director for Economic Planning, and Managing Director of a bank, spoke in an interview, noting that when insecurity or crisis displaces Nigerians, they find solace in the South-West.

He described Yorubaland as “the refugee camp of Nigeria… where everybody is accepted and looked after.”

According to him, “we have invested, perhaps, more than most groups in Nigeria. To prove my point, if there is a crisis in the East today, where do people rush to? The South-West. If there is a crisis in the North, where will they run to? The South-West. “This is the refugee camp of Nigeria. This is where everybody is welcome, accepted and looked after. That is the investment of peace we have been making from time immemorial. “Yorubaland has been the glue that holds Nigeria. If the South-West says it wants to secede, the Middle-Belt will fight us because they see the Yoruba as the cement that holds Nigeria. “During the Civil War, when the Igbo went home, Governor Mobolaji Johnson looked after their property for them. Rents were in the banks and when they returned, their money was given to them to start life all over again. “That is a fact. But the property they left in Port Harcourt were taken over by their neighbours and it took several years before some of them were returned to the owners. “We have demonstrated that we are the most accommodating, we are the cementing culture in Nigeria. So, there is no way we can secede. This is our home.”