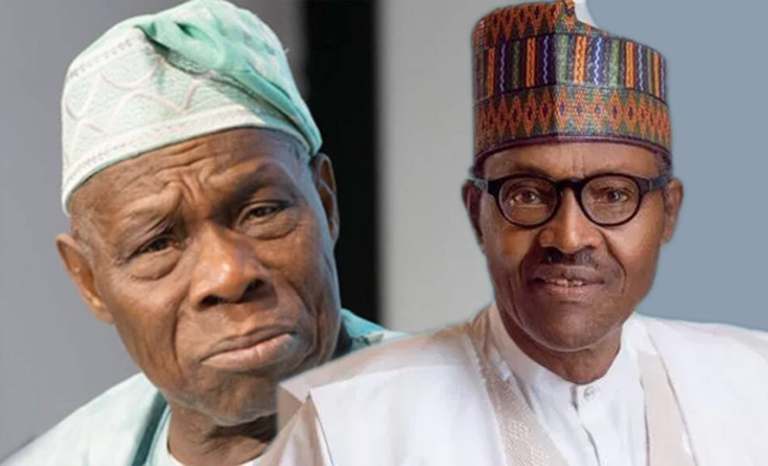 Former President, Chief Olusegun Obasanjo has said that despite the fact that the President Muhammadu Buhari’s leadership was underperforming and things may be gloomy in the country, Nigerians must not despair, just as he asked Nigerians to remain optimistic, but must be vigilant. Obasanjo said that the time has come when every Nigerian must have a Nigerian dream where there must be some commonalities, even as he said that in assessing the midterm government of President Buhari, security, fighting corruption and job creation remain where they were when the government started as it was not yet a success story.

According to him, if Nigeria as a country must get it right, especially entrenching good democracy, there must be good governance, free and credible elections. Speaking Thursday at the Public Presentation of a book titled, ” Politics as dashed hopes in Nigeria by Dr. Auwalu Anwar, former President Obasanjo howéver urged Nigerians to rise and defend the country’s fledgling democracy. The former President said that he would do everything within him that was humanly possible to safeguard democracy for good governance in Nigeria and for all Nigerians, just as he said that in the next couple of months, four West Africa Countries of Nigeria, Senegal, Ghana and Côte d’Ivoire will be having their elections, adding that one common feature is that the four incumbent presidents were in the opposition and people voted for them. He said that the world is watching to see how they would strengthen Democracy in their respective countries. Obasanjo who was the Chairman of the book presentation at the Shehu Yar’Adua Centre, Abuja, said that democracy without a strong opposition is akin to a marriage without a bridegroom to consummate the marriage. The book which is published by Safari Books, is made up of twenty- two chapters, with 614 pages. The former President said, “I am not in despair and I would ask the rest of us not to be in despair; our hope lies in democracy with good governance as one of the hallmarks which is free, fair, transparent and credible elections.

“What should be our take home; yes things may be gloomy, things may not be what they should be, yes leadership may be underperforming, we must not lose hope, that is the first thing. “The second is that I believe we must have some commonalities that we will all hang on to. One our common nationality, Nigeria; this is the time when we must have a Nigerian dream, what is Nigerian dream, what can I hang on to? Yes I am a Nigerian and because I am a Nigerian I expect this. “And I believe if we all see ourselves first as Nigerians and then we enunciate for ourselves the Nigerian dream, a land flowing with milk and honey, a land of opportunity, a land that gives you a stake in all that it is, I think, we will have a country that we can all be proud of.”

ThrowBack: Jonathan supports Obasanjo, says insecurity worse under Buhari “I believe that every record we can keep of the history of Nigeria in totality, it doesn’t matter from what point of view you are writing, it is good for the future of this country because if we do not know our past, we may not be able to channel the right course to our future. It is important that we keep the memory of the past so that so that we can enlighten our present. “I must also congratulate him for the courage and the research work he has deplored in writing such a lucid and comprehensive book. I could see from the content from the book what may appear as the author’s frustration which led to the somewhat melancholy title. “Since the book is about The Buhari Organisation (TBO), Congress for Progressive Change (CPC), All Progressive Congress (APC) and Buhari’s political life and activities up to the second year of Buhari’s administration. I will touch on two or three points that may be of interest to all of us. “President Buhari served the purpose of galvanizing efforts to get Jonathan and PDP out of office. Buhari and the APC must get the credit that because democracy without a strong opposition is like a marriage without the bridegroom consummating the marriage. “But on the midterm scorecard, Dr Anwar pointed out three significant and tangible areas of failure; security, fighting corruption and job creation. As at today, these three areas are still what they were at midterm not yet a success story. “Dr Anwar touched on another significant but intangible areas of failure; exemplary leadership which induce character and power for the sake of what may be called power for self aggrandizement. I can say that I understand where Dr Anwar is coming from to get the title of the book, but we must face despair with optimism. “Last November at the launching of Africa Progress Growth (APG) which I chaired, I raised of Africa Development Growth and Progress as politics, population, protection, prosperity, and partnerships. “I am not in despair and I would ask the rest of us not to be in despair; our hope lies in democracy with good governance as one of the hallmarks which is free, fair, transparent, and credible elections. “Between now and the next few months, there are four significant countries where elections are taking place in West Africa; Nigeria, Senegal, Ghana and Cote d’ivoire. The incumbent in the four cases were in the opposition and people voted for them, it was good for democracy. “The world is looking at these four countries in the incoming elections to see what will be their contribution to cumulatively strengthen, improve and stabilize democracy in each of these four countries. If we all cherish democracy, we will all guard and protect our fledgling democracy and that I believe is the main purpose of Dr Anwar’s book.

“As for me, I will do everything within me possible to safeguard democracy to good governance in Nigeria and for all Nigerians. “I am particularly happy in this respect that most Nigerians themselves are rising to their duties, obligations and responsibilities as guardians of our democracy. I commend all those that are standing for democracy. Remember that if you stand aloof when evil is being perpetrated you will become an accomplice in the perpetration of evil. “Nigerians must be the architect of their own fortunes and future progress but equally gratifying is that the international community have accepted the responsibility and committed themselves to take necessary actions to ensure the health and sustenance of our democracy, therefore, making politics a great hope for Nigeria, for West Africa and indeed for Africa rather than great despair or dashed hopes. “We salute and appreciate those who support us for the general good of Nigeria with a population of 200million and rising, our misfortune has implications for the rest of Africa and the rest of the world in general. Nigeria’s potentials shall be realised by the grace of God.” In his Keynote address, a former member of the House of Representatives, Usman Bugaje, who noted that there was the absence of elite consensus in Nigeria, where each zone is doing its own, without a common sense of purpose, however, urged Nigeria to have a replication of Rwandan model of national integration in addressing socio-political crisis in Nigeria.

According to him, the elite consensus introduced by the Rwandan President, Paul Kagame which reconciled Hutus and Tutsis was required to salvage Nigeria, just as he explained that Rwanda went through the worst genocide in the world but rose to become the safest country with the fastest growing economy in Africa within twenty years, adding, “I am confident Nigeria and other countries can escape crisis. And What gives me this confidence is Rwanda. I am not a fan of Paul Kagame because he has his shortcomings. He is human. “What Paul Kagame does is elite consensus. Today if you go to Rwanda you cannot know who is a Tutsi, who is a Hutu. If you ask them, you will never get an answer. They will just smile. Because they agreed that, they will not go back to that thing that divides them. And they succeed. This is what we require to salvage our country.” According to Bugaje, Poor quality of governance and poor delivery was deepening poverty, with large number of out of school children, just as he said that Parties have lost content, conscience and courage and plays out now is politics of big men which took over from the politics of big ideas, thereby leading to emptiness, money, and violence. Bugaje who also took a swipe at the aspect of the constitution which harps on eligibility and not suitability, said that in the 21st century, it was out of place and not suitable to say that secondary education should be the requirement needed to be the president of the country, adding that there was confusion, clear absence of transparency in the country as well as poor politics of governance. Bugaje who noted that the leadership was not interested in thinking about where Nigeria would be in the next twenty years, the world of Information Technology, wealth moving away from oil to creativity, said that the only consensus now is to loot treasury and continue thuggery, but was quick to add that inspite of all these, there was still hope as we need courage and resilience. Also present at the event were former Vice President and Presidential candidate of the Peoples Democratic Party, PDP, Atiku Abubakar who was represented by former Kano State governor, Senator Rabiu Kwankwanso; former Chief Justice of Nigeria, Justice Muhammed Uwais; governor of Kaduna State, Mallam Nasir El- Rufai who was represented by his deputy; Col. Lawal Gwadabe, Professor Terhemba Shija who was the book reviewer, Spokesperson of Afenifere, Yinka Odunmakin, former Minister of State, Defence, Johnson Agiuyi Ironsi, Jnr, Akilu Ndabawa, Senator Ibrahim Ida, Dr. Umar Ardo, among others.

Nigeria is not a Fulani Republic – Bishop Oyedepo declares

Another Tanker Fire Averted in Lagos, Petrol Truck Leaks While In Motion