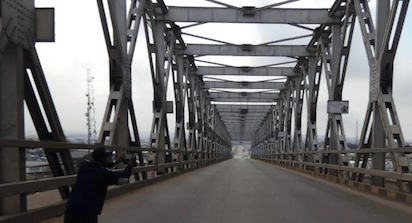 FOLLOWING social media reports that the 55 year–old Niger Bridge linking Delta and Anambra states had become a security risk to motorists due to vibration on some sections of the bridge, the federal ministry of works assured yesterday that the bridge was not threatened in any way.

The federal controller of works in Anambra State, Mr Adeyemo Ajani, who conducted reporters on the bridge, said the vibration being experienced by motorists did not pose any danger and urged users of the bridge not to entertain any fear. He said the only threat was the usual gridlock often experienced on the bridge due to the activities of security operatives and revenue touts that station themselves on both the Onitsha and Asaba ends of the bridge, thereby causing vehicular standstill on the bridge.

He said: “The vibration on the bridge is not dangerous. The vibration being experienced occurs on the joints and there is no bridge that does not have an expansion joint. Niger Bridge was built to stand on two joints to allow for lateral movement. “The bridge is standing on a roller and rocker support which allows movement and the alarm raised was therefore unnecessary. “The bridge has fixed bearings and rocker bearings to allow for longitudinal thermal movement. “There are five basic types of support structures for the bridge, namely roller support, pinned support, fixed support, hanger support and simple support. “The Niger Bridge was designed to function on roller supports, which acts at angular movements. This movement of the bridge is very noticeable when vehicles are stationary on the deck on one lane and heavy trucks are passing by on the opposite lane. There is nothing wrong with the bridge in terms of its structural stability.” Ajani explained that the Niger Bridge undergoes routine maintenance, which ensures its stability, adding that Messrs. Setraco Construction Co. Ltd carried out extensive repairs and maintenance of the bridge between 2005 and 2006. According to him, the Federal Ministry of Works and Housing also awarded emergency repairs of the bridge to Messrs. Matiere-Johnson Consortium Ltd on 6th August 2013 and the company has substantially completed emergency repairs. He said the maintenance by the company requires laying of fresh asphalt and going underground to repair and fortify the bridge. “The public should not entertain any fear because there is nothing wrong with the bridge structurally, What is necessary is the removal of checkpoints at both ends of the bridge by law enforcement agents and the dislodging of the revenue touts at the Onitsha and Asaba ends as their activities cause traffic congestion on the bridge. “We had written the Commissioner of Police and Sector Commander Federal Road Safety Corps, Anambra State on the need to control the flow of traffic into the bridge from a distance, such that the heavy articulated trucks would not remain stationary on the bridge,” he said. The federal controller of works in Delta State, Mr Moshood Jimoh, who was also at the briefing said the state government had been written to remove the permanent police checkpoint that also contributes to the gridlock on the bridge because of the adverse effects.