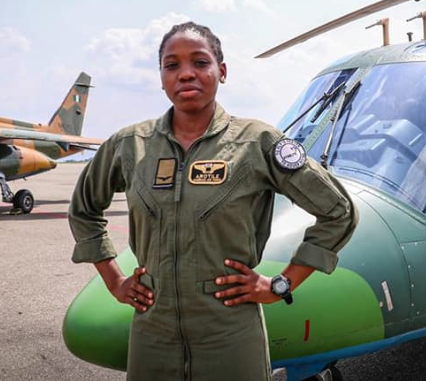 Following complaints by the family of late Nigerian Air Force, NAF, combat helicopter pilot, Flying Officer Tolulope Arotile, through her elder sister, Mrs Damilola Adegboye, that her death was suspicious and should be investigated, NAF authorities said, Friday night, that discreet investigations have commenced into circumstances surrounding her death. Also, pan Yoruba socio-cultural organisation, Afenifere, on Thursday, expressed suspicion over the death of the female officer, rejecting the road accident explanation and calling for a coroner’s inquest into her death.

A source in Kaduna said NAF’s action was to ensure there are no loopholes in the immediate and remote reasons connected to Tolulope’s death.

Recall that Flying Officer Tolulope Arotile was said to have died in a road accident involving a former school mate. The NAF said the female officer sustained head injuries from the accident when she was “inadvertently hit by the reversing vehicle of an excited former Air Force secondary school classmate, while trying to greet her.” However, her sister, Mrs Adegboye, had in an interview disclosed that the explanation given by NAF about Flying Officer Arotile’s death was not convincing enough.

She had said: “We in the family are not convinced Tolu can just die like that in a freak accident. I know that the military is well trained in the art of investigations. ”We want them to carry out a thorough investigation that can convince us beyond all reasonable doubts that the incident that led to her death was real.” Mrs Adegboye hinged the family’s suspicion of the fact that Tolu and herself were in the room on the day of the incident. She recalled that “a call came into her phone which she picked. But from the way she spoke, I knew the caller must be a senior officer calling her to come to Air Force Base. She felt reluctant and I offered to drop her off. “One hour later, I saw the story online that something serious has happened to her. I couldn’t believe that somebody I just dropped off was dead.” The Director of Public Relations and Information, NAF, Air Commodore Ibikunle Daramola, noted that at the end of the investigation, “whatever information needs to go out will go out”. He added: “It is standard practice. So, we are investigating the circumstances leading to her death by a road traffic accident. It is an investigation. It may go beyond NAF.” Already, the NAF has said the late Flying Officer Arotile would be given a Military burial on Thursday, July 23, at the National Military Cemetery, Abuja, with full military honours. Arotile, a member of the Nigerian Defence Academy Regular Course 64, hailed from Iffe in the Ijumu Local Government Area of Kogi State and contributed to the efforts to rid the North-Central states of bandits and other criminal elements by flying combat missions. She was a squadron leader in Operation Gama Aiki in Minna Niger State.