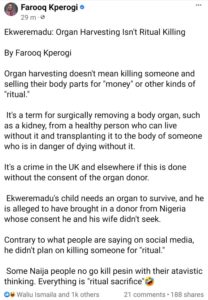 The immediate-past Deputy Senate President, Senator Ike Ekweremadu and his wife, Beatrice Ekweremadu, on Thursday, appeared before the Uxbridge Magistrate Court in London, United Kingdom, on charges relating to conspiracy of human trafficking for organ harvesting.

The victim is said to be a homeless 15-year-old boy who was brought to the UK by the Ekweremadus from Lagos, Nigeria.

Both suspects have been denied bail and remanded in custody as the case has been adjourned to July 7, 2022.

They were charged for allegedly conspiring to arrange or facilitate travel of another person with a view to exploitation.

LEADERSHIP gathered that the influential Nigerian couple was arrested on Tuesday at the Heathrow Airport in London enroute Istanbul in Turkey.

Their arrest, detention and trial, which all surfaced on Thursday on the internet, has caused ripples across the Nigerian political space, with many expressing shock over the incident.

Meanwhile, reacting to the development, a…