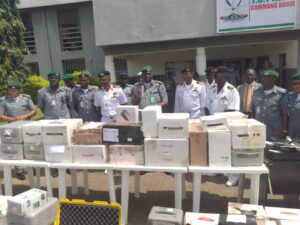 The Nigeria Customs Service (NCS), on Tuesday, handed over 86 units of forfeited drones to the Nigerian Navy in Abuja.

He said the End User Certificate which is issued by the Office of the National Security Adviser (ONSA) was a requirement for purchase and import of the drones and other security items into the country.

Bomoi, who represented the Comptroller General, Nigeria Customs Service, Col. Hameed Ali (Rtd), said the Service secured court forfeiture for the items before being handed over to the Nigerian Navy.