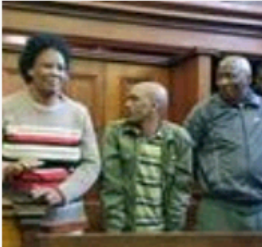 A father was sentenced to life by a High Court in Bloemfontein, South Africa, for arranging the murder of his 17-year-old son. because he no longer wanted to pay child support.

and the hit man, Khoeliea-Marena Sefuthi, were sentenced to life imprisonment each for the murder of Tebogo Molatole’s son, Kearabetswe.

“On the 5 April 2017, the 17-year-old Kearabetswe was from a soccer practice with his cousin, when left him and went to the shops to buy soft drink.  On his return he found Kearabetswe lying in a pool of blood in the backroom of his father`s house in Gladstone, Thaba`Nchu, ” Thambo said in a statement.

“Thaba Nchu Police were summoned to the scene and it was discovered that the boy had been shot in the head and chest. The…