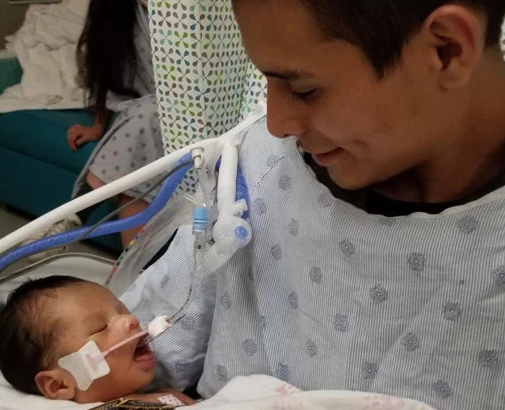 The newborn baby boy who was cut from his mother’s womb after she was killed by a woman who wanted the child (read here), has opened his eyes for the first time.

Marlen Ochoa-Lopez, 19, was killed after she shared a Facebook post revealing she needed baby things and a woman – her suspected killer – responded, offering to help her out.

She was declared missing after she went to collect the items for her unborn baby but never returned. Later, Clarisa Figueroa, 46, who offered to give her free baby clothes, claimed that she had just given birth on the same day that Marlen went missing. Paramedics went to the home where the woman claimed she had given birth and they found the baby boy. However, DNA tests showed that the baby belonged to Marlen, not to Clarisa. Marlen’s body was also recovered in a dustbin in the backyard.

The baby boy was taken to the hospital and placed in intensive care where he was in critical condition.

A photo has now emerged of the boy…