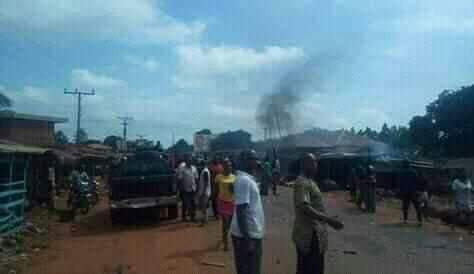 According to reports, Urama who who from UmuIdoko, Ogrute, was tortured to death by the group after he was accused of receiving stolen goods from a suspected thief from Aji.

‘The dead body you see below is Chibueze from Ogrute Enugu Ezike selling medicine (Chemist shop) at Ezetech Plaza Imufu E/E, he was invited by Aji Vigilante group to answer some questions because there was burglar incident in a chemist shop in Aji of which a suspect was arrested and he mentioned the same Chibueze as one of those that he use to sell his stolen items to, Chibueze honored the Vigilante invitation only for them to demand #30,000 for bail out of which he paid after being proven to be innocent but the continue to torture him him to death, though the matter in police now but the…