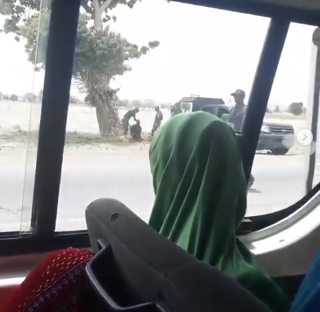 A Twitter user @ikedichim this evening shared a video of some soldiers allegedly assaulting young men plying Funtua road, Katsina state earlier today. According to the twitter user, the soldiers ordered the boys from the vehicles they were riding in, allegedly cut their hair and thereafter demanded for N1000 for the service. He however did not state if the young men committed any crime. Watch the video below..

Watch the video below     View this post on Instagram         Soldiers at a check point before Funtua allegedly force boys out of vehicles, use scissors to cut their hair and reportedly demand N1k from them after the haircutA post shared by Lindaikejiblog (@lindaikejiblogofficial) on May 27, 2019 at 11:37am PDTThe post Soldiers in Katsina allegedly forced boys out of vehicles, used scissors to cut their hair and demanded N1k from them (video) appeared first on Linda Ikeji Blog.