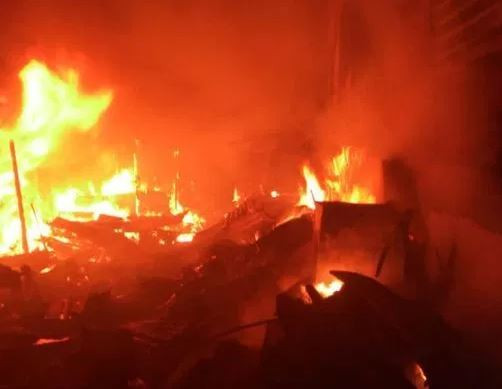 Goods worth several millions of naira have been destroyed in a midnight fire that razed the biggest motor spare parts market in Edo State located at Uwelu, in Egor Local Government Area of the state.

The fire was said to have started at about 11:45pm Monday night, August 12th and lasted till about 4am after efforts from fire service men from the University of Benin and the Nigerian Army.

Sections of the market affected by the fire were the lines were Mercedes Benz, Mazda, Ford and Toyota parts are sold. It was gathered that some of the affected traders just bought goods to fill their stores. Some of the traders were said to have collapsed when they visited the scene and saw the magnitude of their losses.

One of them was said to have attempted running into the raging fire, but was stopped. One of the victims, Daniel Okungbowa, who deals in all types fuel and oil pumps, said he lost goods worth about N4 million to the fire. Another victim, Osaeruoname Festus, said…

”God doesn’t exist’ -See reactions after Trump tweets ‘Palm Sunday is the beginning of a Holy week for many people of Faith and a...

We are safe and sound