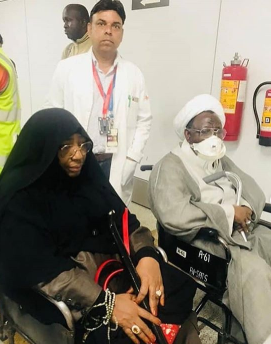 The Islamic Movement in Nigeria (IMN) aka Shi’ites, has accused the federal government of frustrating the medical treatment of their leader, Ibrahim El-Zakzaky and his wife, Zeenat, in India.

A statement released by the secretary of academic forum of the movement, Abdullahi Musa, alleged that the federal government and some security operatives “working for the US government” were conniving to ensure that El-Zakzaky and Zeenat would not be treated.

According to Musa, the Medanta Hospital, New Delhi, where El-Zakzaky and his wife were taken to immediately they arrived India on Tuesday August 13th, has been threatened not to admit him for treatment.

“Reports reaching us from the hospital indicate that the security agents are colluding with foreign security agents believed to be working for American government. Even before the Sheikh arrived the hospital, we gathered from competent source that officials of American embassy in India instructed management of the…

”God doesn’t exist’ -See reactions after Trump tweets ‘Palm Sunday is the beginning of a Holy week for many people of Faith and a...

We are safe and sound