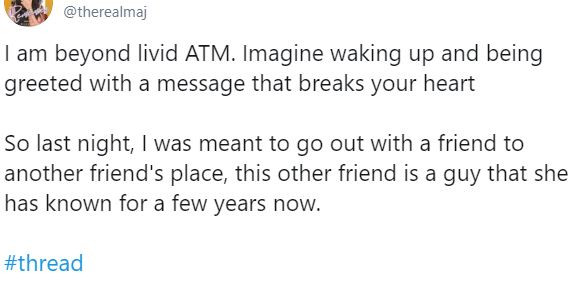 Singer, Maj has just revealed via a Twitter thread that her close friend ‘may have just been raped’ by a guy she’s crushing on.

According to her, ‘he asked her out a while back but she turned him down saying she is not ready for a relationship, but they somehow managed to remain friends after then. Over time, she somehow developed feelings for the guy but decided not to tell him’.

Fast forward to las night, ‘she went to visit him and they decided to stay at his place instead of going out. They kept drinking and then one thing led to the other, they started making out until the guy decided to start removing her panties. According to my friend, she resisted and said no, but the guy refused to listen to her and kept going until he had his way’.

See the full story below….