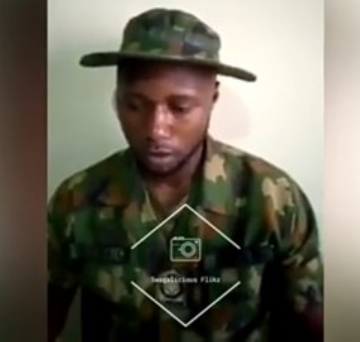 A Naval officer has cried out and accused a Rear Admiral of maltreatment.

In a video recorded on Monday, July 13, 2020, Naval Officer Seaman Haruna Goshit made a number of accusations against his boss, Rear Admiral I.O. Mohammed.

Goshit, from Jos, said he and two other orderlies were posted to serve under Rear Admiral Mohammed but he rejected the other two because they are Muslims. Goshit said Mohammed did so because he is tribalistic.

He also claimed that Mohammed punished him constantly over petty things. He said he once told him to hug a tree infested with soldier ants. He explained that it was a painful experience because the soldier ants kept biting him while he served the punishment.

He also claimed that Mohammed usually asked him to use his personal money to pay for his (Mohammed) household expenses but wouldn’t pay him back. He went ahead to mention the things he has done for his boss with his personal money that was never repaid.

He further stated that…