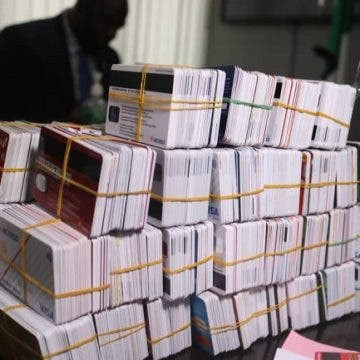 A Dubai-bound passenger with 2,886 Automated Teller Machine (ATM) card carefully concealed in a noodles has been intercepted by operatives of the Nigerian Customs Service (NCS) at Murtala Muhammed International Airport (MMIA) command and handed over to the Economic and Financial Crime Commission (EFCC).

The Kano passenger identified as Ishaq Abubakar with Passport Number A08333717, was intercepted on Thursday September 10 while travelling to Dubai via Emirates Evacuation flight.

The Deputy Controller of customs in-charge of the MMIA, Abdulmumin Bako said in a media briefing;

“At about 1145 hours on Aug. 22, at the departure hall gate ’B’ of the MMIA, Abubakar with Passport Number A08333717 from Kano State travelling to Dubai via Emirates flight was intercepted with 2,863 ATM Cards and 4 sim Cards by our officers on duty. The ATM cards and sim cards were carefully concealed in an noodles carton by the suspect.

“The suspect claimed that one Mr Musliu was…

2020 has been very interesting with lots of hills and valleys