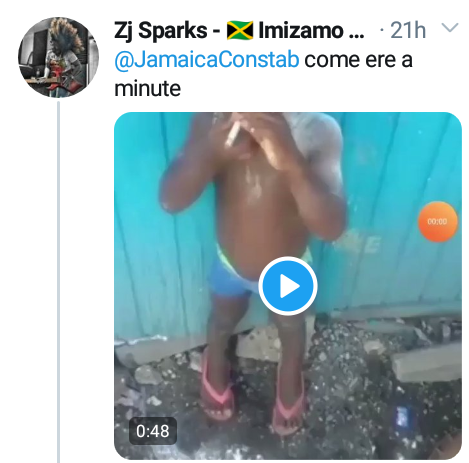 The police and the Child Protection and Family Services Agency (CPFSA) in Jamaica are seeking the public’s assistance with locating a toddler shown smoking and drinking alcohol in the presence of encouraging adults.

In the 48-second video which surfaced on several social media platforms on Monday, September 21, a man and woman are heard urging the child to smoke cigarette and drinking from a bottle.

“Puff it. A di dawg birthday enuh man. A high di dawg high today. Puff it Minty,” the man said as the child coughs while following the instruction.

A female then instructs the minor to hold and sip an alcoholic drink in the bottle.

“See ‘Ice’ yah. Hold now… Take a sip,” the woman said, amid laughter from other adults who were present.

The man further instructed the child. “Trauma today. Puff it out again Minty. Take two puff out ah it again,”

A Twitter user posted the video and tagged the Jamaica Constabulary Force (JCF) account.
The police responded by thanking the user…