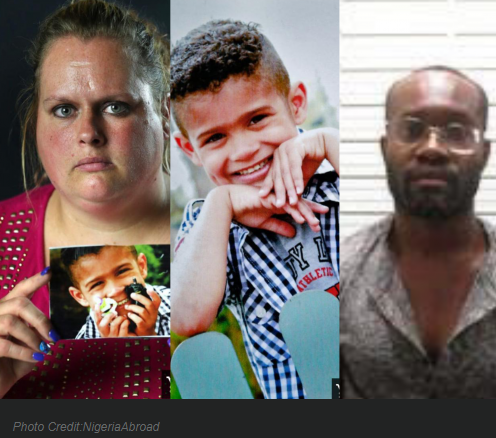 An American woman has claimed that her Nigerian ex murdered their son just to spite her.

Hayley Kelly, an American woman from Wabash Indianapolis, went in search of love on a dating site in 2008. Her search led her to one Miguel Nchama, a Nigerian guy she said was “a sweet guy”.

They fell in love, dated for two years and had a son they named Nakota, NigeriaAbroad reports.

The relationship “protected by lies” came to an end a few years later. The relationship began to unravel in 2011 when the police came for Nchama. A certain Judson Mbanuzue, a Nigerian in the United States had filed a report alleging Nchama, who was housed by the Mbanuezue family in 2002, stole his ID, obtained a social security number with it, and piled up loans in his name.

Nchama pleaded guilty to charges of identity theft and social security fraud and was jailed for 34 months.

But investigations into the case uncovered more disturbing secrets. The name “Miguel Nchama” was actually one of…

Is this man about to stock his shop with cartons of looted COVID-19 noodles?